Announcing Realm of the Ghost King 1.1.0!

For immediate release, Mantis-Eye Labs, LLC is pleased to announce:

After dozens of sales and a little time away I'm happy to announce the future of Realm of the Ghost King! In the near future an update with new content, bug fixes and other fun stuff will be released totally free of charge to current owners of the game!

So what content is in ROTGK 1.1.0, you ask? Well, here's how game development works: you think of all the cool shit you want to put in a game and then you completely cut like 80% of those things because otherwise you'd never release anything. 1.1.0 is my chance to add back in some of those things!

Because I can! The game didn't exactly sell like hotcakes, which is fine, but the last year or so of development was quite a slog. It made me kind of dislike the game, and I don't want to end on that note. So I'm adding in a few features that I cut, some other good ideas I had, and tossing in a couple things I knew would be really fun to build. It's an update for me, the developer, as much as you, the player.

So what's in it? Glad you asked!

I made a roguelike in seven days! It's called Shift Stack and you can play it on itch.io (in a desktop browser) for free!

I had a lot of fun making this game and I want to go into some aspects of the game I like and some that I don't. I'm going to assume you've played it a little bit, so if you haven't you might want to give it a spin. You don't have to, of course, but it might make more sense to play it and then read this.

The main idea I had when I started this game was playing with the idea of "depths" in traditional roguelikes. Generally there are some number of levels you traverse down into, and in some cases you can retrieve something from one of the lower depths and then go back to the first one to win the game. Hoplite worked with this formula very well, and one of my favorite iOS roguelikes, MicRogue (which I can't find an offocial website for, so I'm just linking to the App Store and Google Play Store), used this as its main goal.

The main mechanic of Shift Stack is that you can warp between depths (or levels) pretty much at will. There's a limit to how many times you can do it and yu can only warp to adjacent levels so it's not completely free, but it feels like a worthwhile limitation.

The second mechanic I ended up adding is making the player helpless, so to speak. You can warp levels and move around but otherwise you're powerless. No attacks, no abilities, no spells or anything like that. This ended up happening because I wanted the focus to be the level warping and not just wrangling enemies so you could punch them in the face.

So then how do you win? Rather than collecting a single treasure from one of the levels, your goal is to defeat all the monsters. Since you can't attack them, monsters are more dangerous than a standard roguelike. While you can end up adjacent to one and never get attacked, you can get trapped and since you ony have two health you can only really sacrifice one hit point most of the time.

My continuing series of updates, I released ROTGK 1.0.5 which has some (hopeful) fixes for Linux crashes, the blocked exit bug (not optimistic about this one at all) and a Steam achievement issue as well. Patch notes are on Steam and itch.io as always.

1.0.3 introduced a pretty silly bug, so I wanted to patch it up to 1.0.4 pretty quickly. Hopefully I can lay off breaking my own game for at least a few days now. You can read the full patch notes on the Steam Community page or the itch.io devlog if you prefer.

This one is already making me realize I will need a new patch soon, but I'm sure people don't mind waiting a little.

The main piece of news is the Linux version is finally out. This was slightly more of a struggle than the Mac or Windows versions since I don't have a computer running Linux and I didn't really want to set up an existing one to dual boot. So I installed Vagrant and VirtualBox and all that good stuff and here we are: 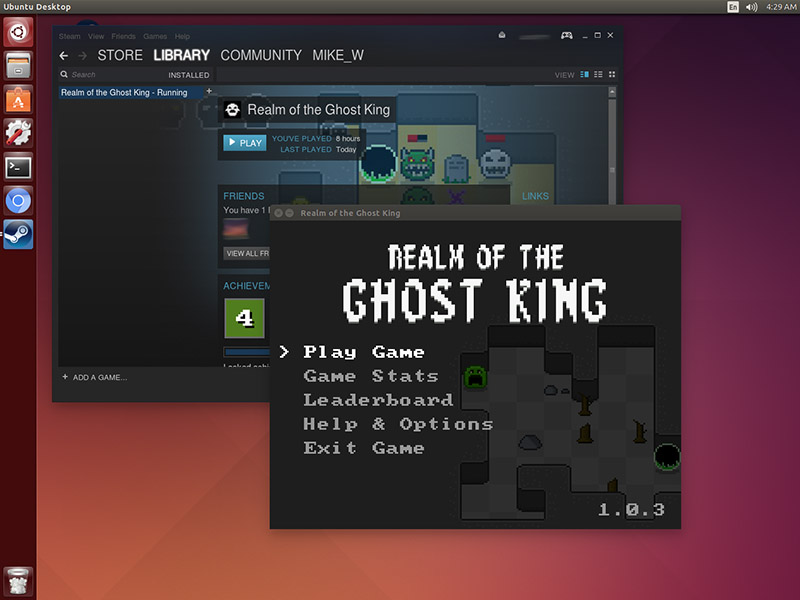 It's hard to tell how well it runs since things in a VM generally don't run super well, but it seems to be pretty quick all things considered, so I'd imagine someone running it non-virtually will have a good experience. The DRM-free version is also up on itch.io if that's your preference.

There's also one gameplay related change, which adds visible enemy spawn spots (one turn before they spawn) for all those enemies that teleport in during each map (you can see a screenshot in this Steam update). My main reason for this was sometimes I'd be playing too quickly and run up against a spot where an enemy had just spawned and immediately get hurt or killed. This won't actually prevent that from happening, but it takes away my excuse for why I'm so bad at my own game. Maybe I'll take it out in a couple of weeks when I decide I want that excuse back (I won't).